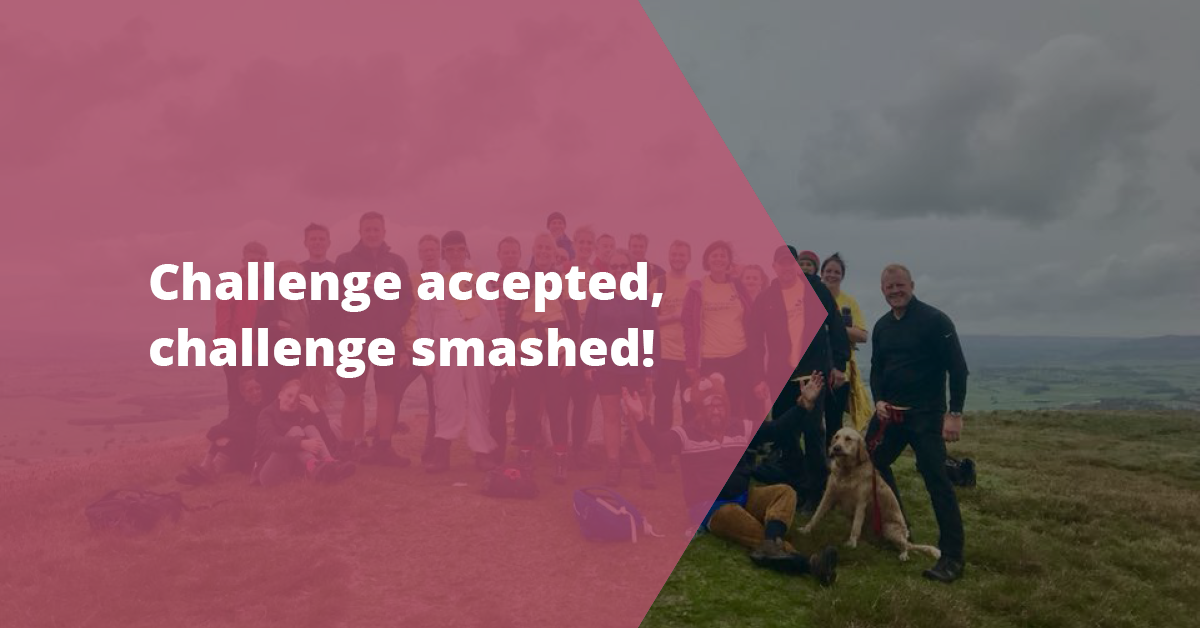 Colleagues, friends, family…and Elvis…demonstrated the true meaning of teamwork when they completed the gruelling Pendle Three Peaks Challenge and raised almost £15,000 for charity.

Organised by Businesswise Solutions, which in the same week launched new, futuristic style offices on the Lomeshaye Industrial Estate, a team of 29 walked the 27-mile route to raise funds for Pendleside Hospice.

Together, they smashed the £10,000 fundraising target thanks to generous donations and the first £5,000 matched pound for pound by the company.

Starting at Barley Car Park, the team of ramblers walked the long stretch to Boulsworth, before arriving at a welcome pit stop manned by Businesswise director Peter Catlow and his wife Sue.

Unique Campers had kindly donated a camper van for the day for Peter and Sue to serve sandwiches and goodies generously provided by Lomeshaye café Northern Relish.

The walkers were also grateful to a couple from a neighbouring house in Keighley Road who brought out the brews and invited walkers to use their loo!

The group rambled on towards Weets before picking up a few more supporters to join them on the final Pendle Hill leg.

The walk was particularly poignant for Businesswise Solutions’ managing director Frazer Durris, who lost his dad, Peter Macgregor, to cancer a year to the day of the walk. He said:

“It really was a fantastic day from beginning to end; it was tough and we were all feeling the strain as we approached the final few miles, but everyone carried on with a smile on their faces.

“So many families in the Pendle area receive support from Pendleside Hospice every year, so to be able to raise such a significant sum is incredible.

“I want to say a huge thank you to everyone involved, from the internal events we held in the office, the planning, donating and volunteering to doing the walk itself; you know who you are!”

The company will celebrate its 10th anniversary in 2020 and there are already whispers of what the next epic challenge will be in two years’ time; watch this space….