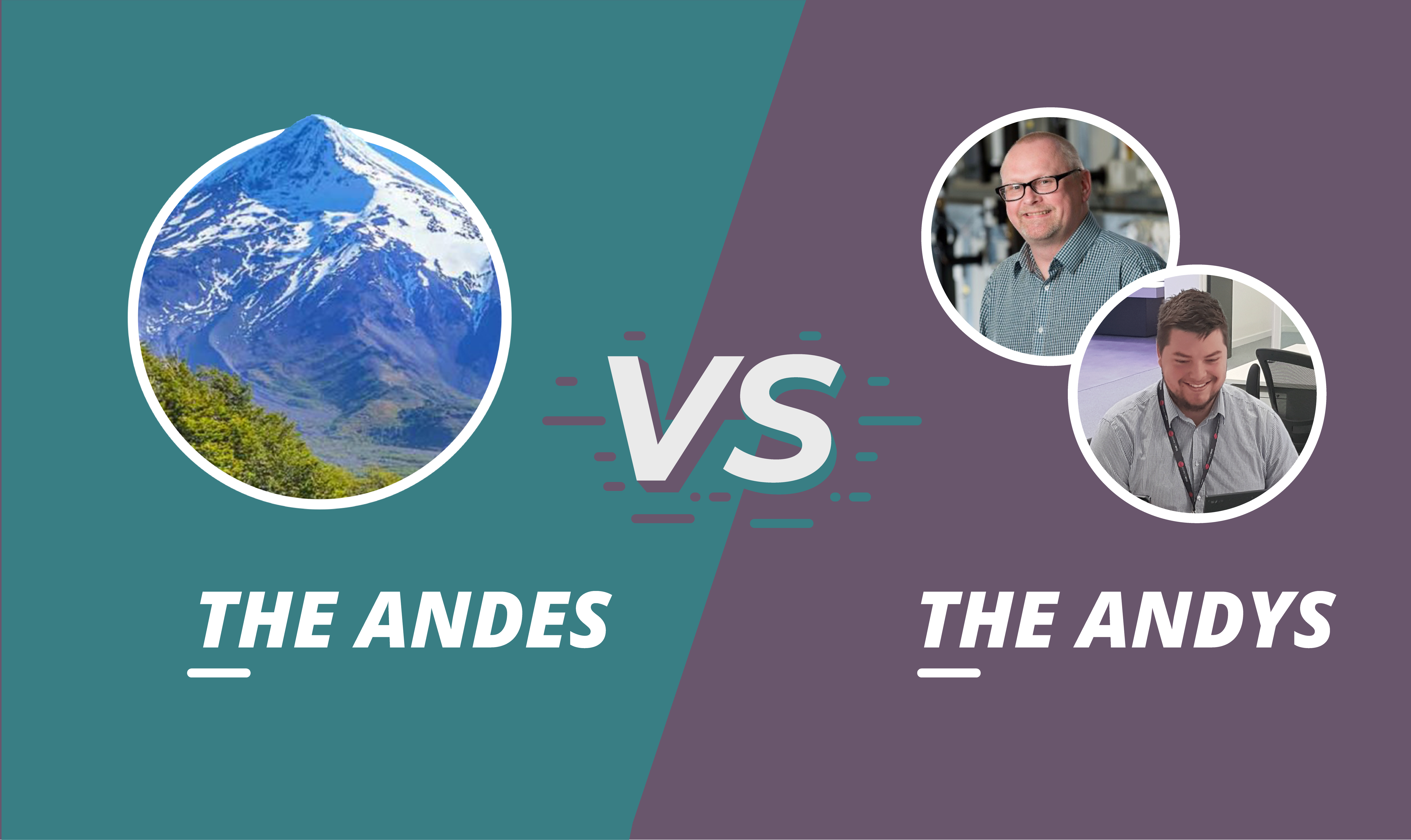 But what you might not have known is that we have Andy’s of our own – Andy Bardsley, Head of Energy Projects, and Andy Butterworth, Energy Improvement Manager. Our Andy’s share some of the same traits, mainly in the way that they’ll also cover any terrain but in their pursuit of helping our clients eliminate energy waste through their ‘boots on the ground’ approach.

Now we don’t want to brag but our Andy’s are infinitely better, in all the ways that matter. So, let’s compare the two, shall we?

First up, elevation. Ok, the Andes have just slightly pipped our Andys to the post here. The impressive mountain range stands at an average of 6,961m – that’s going to be hard to beat. Our Andy’s stand at a combined height of around 3.7m, so they’ve only been beaten by around 6,957m, we’d say that isn’t so bad! Plus, Andy Bardsley, Head of Energy Projects, is a man-mountain (the Andes are just regular mountains) standing at an impressive 1.98m – which has got to be worth something!

Next up is location, as mentioned previously the Andes reside on the west side of South America spanning seven countries — Venezuela, Colombia, Ecuador, Peru, Bolivia, Chile and Argentina – making it the longest mountain range in the world. Another huge blow to our Andy’s chances of winning this debate, but wait! Yes, our Andys may only span the Energy Projects desks, but they possess the highly useful power of movement. Our Andy’s are constantly on the move striving to help our clients wherever and whenever they can – let’s see the Andes do that, ha!

Now, let’s talk about age: as a huge, naturally occurring geographical landmark, the Andes have been around a pretty long time: around 50 million years when the South American and Pacific tectonic plates collided. Now, our Andy’s are at least 75 years younger than the Andes (not incorrect), and so don’t have quite the same worldly experience the ancient mountain range does. However, we’re a technology based company so we want young, fresh & not-50-million-years-old talent with us, but we’ll begrudgingly give this one to the Andes.

Last but certainly not least, is energy saving ability. We won’t lie, we’ve been waiting to spring this one on the Andes – they’re pathetic when it comes to this category. Sure they might be nearly 4000m high, span seven countries and be around 50 million years old – but when you need to cut your business’s energy consumption where are they? Yes, lounging around in South America not doing anything. Our Andy’s however, are experts in this field, with over 40 years experience in the energy industry, saving energy on people’s bills time and time again. Their passion is helping customers out with their energy needs, and they have a great track record of doing this – Andy Butterworth even developed a wireless energy monitoring system that was deployed globally, and was accepted onto the Energy Technology List as an energy saving device, we doubt the Andes could even pronounce that. So, our Andys have a resounding win in this field, and since we’re the scorekeepers they’ve sent the Andes packing pack to South America on the scoreboard too.

So there you have it: the Andes, huge mountain range spanning many countries across South America, visited by thousands of people every year; rubbish at identifying energy savings and helping businesses to identify and eliminate energy waste. Plus, talking to our Andy’s is no uphill struggle.

To find out more about how our mountain-beating Energy Projects team can help you, get in contact today.

How one apprentice found his perfect job at Businesswise... When apprentice James Waring was made redundant from his job at a Lancashire furniture manufacturer he decided to take matters into his own hands. [...]

Iconic wallpaper manufacturer to switch to renewable energy in a bid to slash their carbon footprint.  Chief executive of Graham & Brown Andrew Graham MBE said switching their electricity to a renewable supplier [...]

Back in September we virtually met with 20 food and drink industry leaders to discuss the current state of the industry and what, they feel, the future would bring for food and drink [...]