Skip to content
FDF Report: Government must do more for food and drink industry 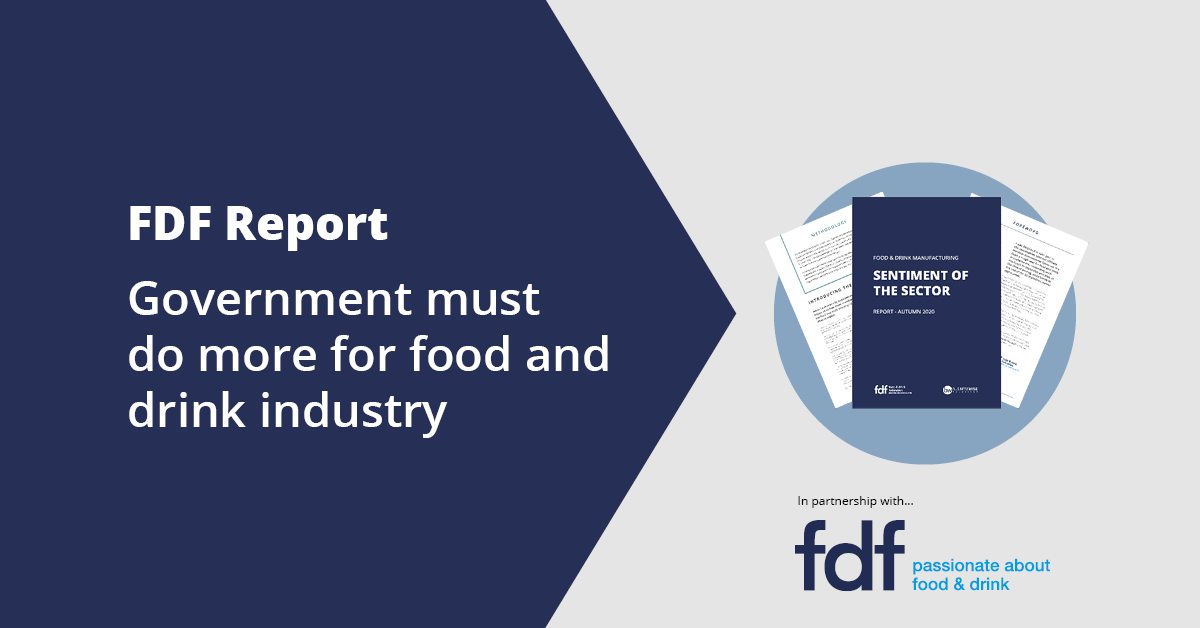 The Government has been accused of not doing enough to support the UK’s food and drink industry from the ‘perfect storm’ created by Covid-19 and Brexit.

That’s one of the main conclusions from more than 20 of the biggest names in the sector who’ve contributed to a white paper on the health of the industry by the Food and Drink Federation and sustainable energy management specialists Businesswise Solutions.

Unsurprisingly the two big talking points to dominate the ‘Sentiment of the Sector’ discussions were Covid-19 and the uncertainty over Brexit.

In relation to Covid-19, 60% of businesses surveyed said they suffered a major impact on sales and forecasts during the first six months of 2020 with 85% of companies reporting a knock-on effect on their cash flow and budgets.

Nicki Hunt, Membership and Commercial Director of the Food and Drink Federation said:

“It’s been a tough year for food and drink manufacturers, what with the disruption of Covid-19 and the uncertainty we face as we head toward the end of the transition period. But businesses within the sector are adaptable and resilient, and have worked hard to keep the country fed.

“Those companies who supply the hospitality and out of home sectors have been hit particularly hard so we continue to push for further support and guidance to be extended to the wider supply chain.”

Frazer Durris, CEO at Businesswise Solutions, said: “Companies linked to tourism and hospitality have seen demand fall off a cliff while those supplying retail have seen demand soar. The uncertainty caused by the pandemic has made forward planning difficult if not impossible.

“The sector desperately needs more support in the form of clarity from the Government. A number of the companies who spoke at our roundtables said they were holding back on investing in major sustainability projects until the picture becomes a bit clearer. This represents a big climate risk and one that can be avoided if the Government can provide more certainty to these businesses”.

Steve Morgan, Managing Director of Synergy Flavours, was one of those to contribute to the white paper. He said: “We have the capacity to come through this crisis well enough but if we’re serious about being a globally facing trading nation we really need to up our game. Other national governments have significantly more effective support in place than is currently the case in the UK.”

Many in the food and drink sector are equally concerned about the uncertainty over Brexit, with the transition period after the UK left the EU due to end this year with no sign of a trade deal being agreed.

Julia Wood, Managing Director at PDM Produce, said: “Realistically, our biggest challenge is Brexit and getting workers from Europe in the same capacity as we could in years gone by.

A total of 65% of those quizzed said they were ‘not feeling confident’ about how Brexit would impact their business with 35 per cent saying they were ‘unsure, but hoping for the best’.

The overwhelming sentiment of the industry is that there has been a lack of information, clarity and direction which has caused uncertainty on a massive scale and prevented businesses from planning ahead or investing in major projects.

Richard Hampton, Director of OMSCO, the UK’s largest, farmer-owned and run, organic dairy cooperative, said: “If you take a long view, big challenges will always arise and Covid is one of the most serious threats of the modern era – but we will recover from it, some sectors better than others.

“The frustration for me is the continued uncertainty on key issues such as Brexit. Give us certainty, give us line of sight and we’ll do the rest.”

Ross McMahon, CEO of Kendal Nutricare, manufacturer of Kendamil, the only British made baby formula, wants the Government to encourage consumers to buy British to support manufacturers and farmers struggling from Brexit and Covid.

Around a quarter of people currently employed by food and drink manufacturers are from EU countries and it’s predicted as many as 100,000 jobs could be unfilled if they have to rely on the UK population alone.

The Food and Drink Federation submitted more than 175 questions to the UK Government, specifically around how food and drink manufacturers should be preparing for the end of the transition period in December 2020.

The white paper concluded that seven out of 10 businesses felt uncertain about the current state of the industry while 55% believed the UK Government was not supporting the industry enough.

* To download a copy of the  Sentiment of the Sector white paper go to https://www.businesswisesolutions.co.uk/food-and-drink-manufacturing/