Skip to content
EnergyIntel: Should Your Business Have a Net Zero Roadmap?
Back to EnergyIntel

Article: Should Your Business Have a Net Zero Roadmap?

According to the International Energy Agency (IEA), all the technologies required to achieve the necessary reductions in global emission by 2030 are already available.

So does that mean the only thing preventing any business from being carbon net zero is the decision to do it? The reality isn’t so simple.

There are two factors that need to be discussed and evaluated before any company starts out on a net zero journey. These are:

Does it make commercial sense? If the benefit outweighs the cost of investment – for instance, if you’re already losing revenue because you don’t have a net zero target in place – then it makes sense to begin the journey now.

The other factor is, how complex is it to achieve? The truth is a lot goes into achieving net zero, and it’s not just down to knowing and reducing your own emissions. Your suppliers also need to report their carbon intensity to you. That’s because between 70 – 85% of an organisations carbon emissions are out of its direct control. Learn more about Scope 3 emissions here.

The Roadmap to Becoming Net Zero

Almost one-third of the UK’s largest companies are leading the world’s transition to a low-carbon economy, pledging to align with the UK government ambitions and eliminate their emissions by 2050.

Rolls-Royce has committed to achieving Net Zero greenhouse gas emissions from its operations and facilities by 2030. This entailed implementing a circular economy approach to their manufacturing process, which means that up to 95% of their jet engines can now be recycled.

Sainsbury’s has pledged £1 billion over the next 20 years to achieve Net Zero emissions by 2040. As part of this pledge, the company has committed to reducing food waste, plastic packaging, and water consumption, as well as increasing recycling, biodiversity, and healthy and sustainable eating.

Hilton Hotels & Resorts is one of many hotels that are leading the hospitality industry towards a Zero Carbon economy and reducing greenhouse gas emissions. Hilton has committed to reducing its Scope 1 and 2 carbon intensity by 61% by 2030.

During COP26 the UK strengthened its ambitions announcing that all listed companies will have to release Net Zero plans by 2023 and report annually on their decarbonisation efforts. This will mean the UK’s biggest organisations paying much closer attention to the emissions within their supply chains, which could be a headache for those organisations which aren’t captured by the mandatory reporting requirement, but are captured within the supply chain of organisations that are Meaning Net Zero isn’t just for big business.

Start on the right path

Whether your business is captured in a listed organisations supply chain or not, a flexible roadmap can help any environmentally conscious business create a plan that outlines the steps needed to take to become carbon net zero.

As a result, having a roadmap not only provides clear steps needed to achieve Net Zero goals, but also builds stakeholder confidence and supports Environmental, Social, and Governance (ESG) related factors.

If your business is working towards a Net Zero Roadmap or is interested in finding out more, get in touch with one of our experts. 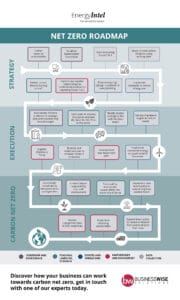 EnergyIntel Article: What Is RO Mutualisation and What Does It Mean for Businesses?

back to energyintel Article: What Is RO Mutualisation and What Does It Mean for Businesses? This intel talks about Renewable Obligation (RO), RO mutualisation [...]

EnergyIntel Infographic: How to Develop a Sustainability Team

Back to EnergyIntel Infographic: How to Develop a Sustainability Team Bringing sustainability into your business will make reducing carbon emissions and minimising waste quicker and easier. One way [...]